They have played hundreds of shows over the past few years, and are now looking at embracing European shores this summer. Fusing the sounds of ZZ Top with Kyuss by way of Robert Johnson and Black Flag, the band has continually outdone themselves since their formation in 2011.

The band built their name on the road, but it was a split with Left Lane Cruiser that propelled them to the next level. Now they seek to grow upon all of this and bring the entire stoner rock scene to a new frontier.

This is the sort of band who remain devout to their community no matter the consequences. The stoner rock underground has allowed them to make a living from this, and they are determined to give back.

Frontman Tom Jordan is even stepping in as an organizer of Wisconsin Doomed & Stoned Festival. Their DIY aesthetic has impressed fans across the world, all of whom are eager to see the band’s next steps.

This dedication has paid off in other ways too and won the band endorsements from Gretsch Guitars, Saluda Cymbals, Scorpion Drum Sticks, Lava Cables, SIT Strings and Rock Relentless Clothing.

With a dedication to writing good music and spreading their message across the globe, 20 Watt Tombstone refuse to give in.

Fresh off their first European tour the intrepid duo continually pushes for opportunities to show the world what they are made of, be that crucial opening slots or driving 16 hours to play a dive bar.

Remember – this is a group who records everything live in the studio. There’s no room to mess around in 20 Watt Tombstone. Instead they are doubling down on their live magic and are eager to delve ever deeper into this scene.

With loud guitars and a passion for the music what could go wrong? 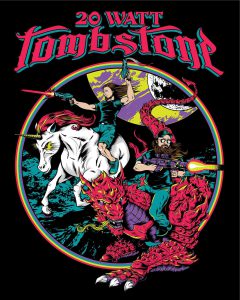